The burgeoning cannabis sector continues to garner a lot of public and investor attention even months after last year’s first phase of legalization of the substance in Canada. Headlines on both sides of the North American border have focused on heart-stopping share price gains from weed producers as well as multi-billion-dollar deals with major corporate players in several industries poised to be disrupted by pot.

Yet for all the sound and fury, many questions still remain. The most prominent: how will all this play out?

It’s certainly a valid query, as there are many facets to this prolific sector including several other segments in addition to the recreational market. How big will the medicinal and pharmaceutical applications be? Will the retail edible market be the next big thing? Or, will cannabis revolutionize the beer and beverage industry?

Despite the unknowns, the intrigue is being fueled by the estimates of the size of the markets, which all range in the billions.

In Canada, the answers to some questions are beginning to come into focus as the date when many of these products will be legalized fast approaches later this year. While the world watches this next phase closely, many observers speculate it will be the true test for cannabis companies.

While the major players in this space and their U.S. corporate partners—such as Constellation Brands (NYSE:STZ), Altria Group (NYSE:MO) and Coca-Cola Company (NYSE:KO)—in the beverage, tobacco and cosmetic fields concentrate on the ‘what,’ as they draw up plans for the kind of products they will produce, one small Canadian company has started to attract interest by focusing on the ‘how’ they will be produced.

By taking this route, Nextleaf Solutions (OTC:NXEAF), (SNX:OILS), a small-cap company located in British Columbia, that manufactures cannabis extraction and processing equipment is aiming to become a world leader. 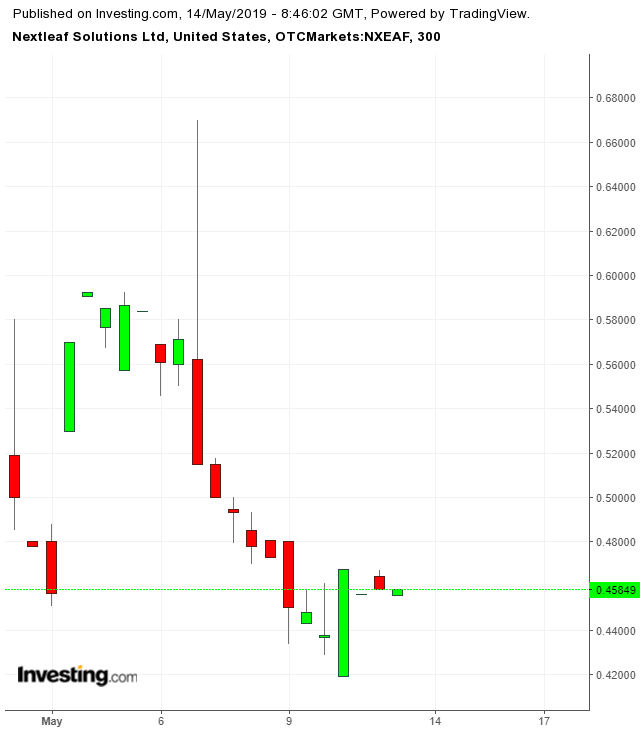 The Vancouver-based company is a different kind of player in the cannabis sector. It doesn’t cultivate the plant. Rather, it brands itself as a technology company that has developed patented processes to extract cannabinoid oil from the plant. The process creates a distillate, which NextLeaf calls “the precursor of every cannabis-infused product.” According to NextLeaf’s CEO Peter Pedersen, in an interview given earlier this year:

“Intellectual property is going to be a big differentiator and value creator in this industry, similar to bio-tech and life sciences.”

The company, which trades in Canada under the aptly chosen ticker OILS, was the recipient of the first patent in that country for the purification of cannabinoid oil. It also holds three U.S. patents for a process that creates a highly concentrated odorless and tasteless concentrated THC or CBD distillate, which can be standardized for potency.

NextLeaf plans to begin commercializing the process by supplying services to licensed cultivators under their clients own brands. It is also supplying the oil, which is in short supply, to licensed distributors.

“In the last two years since inception, we have been an R&D-focused company, and we have been quietly developing (intellectual property). We have been able to beat every billion-dollar market cap cannabis company to first-issue patent,” explained Pedersen. “And 2019 is all about commercializing that IP.”

Trading since March, the company’s stock has increased 51 percent in the last month, going from CAD 43 cents a share to CAD 65 cents. Shares on the U.S.’s OTC market are similarly priced and have had a similar trajectory.

Though a small player when measured against the bigger names in the cannabis space, NextLeaf is unlike all the others. Primarily it’s a technology firm aiming to claim its own unique footing in the industry. Analysts with Ubika Alpha earlier this month initiated coverage of NextLeaf, issuing a buy rating and a 12-month target of CAD$1.65 per share.

In a videoconference last week, Pedersen explained how not having to worry about establishing a cultivation operation and ramping it up, has allowed the company to focus on perfecting its process.

Here are some additional facts to consider: According to Research and Markets, the global cannabinoid hemp market alone is expected to grow from US$176.15 million in 2017 to US$1.182 billion by the end of 2024. As for the edibles and pharmaceuticals space, Pedersen points out that having the ability to standardize the potency and formulations offers advantages for commercial product development.