The payments industry is undergoing rapid change, with noncash payments disrupting existing systems. The transformation has created a competitive battleground between already established companies in the industry vying for a leadership position in the future of cashless payments.

Here are the key takeaways from those earnings releases:

PayPal continued its torrid pace of growth in the first three months of 2019, with analysts and investors especially encouraged by incredible growth numbers for its popular peer-to-peer mobile payment app, Venmo. 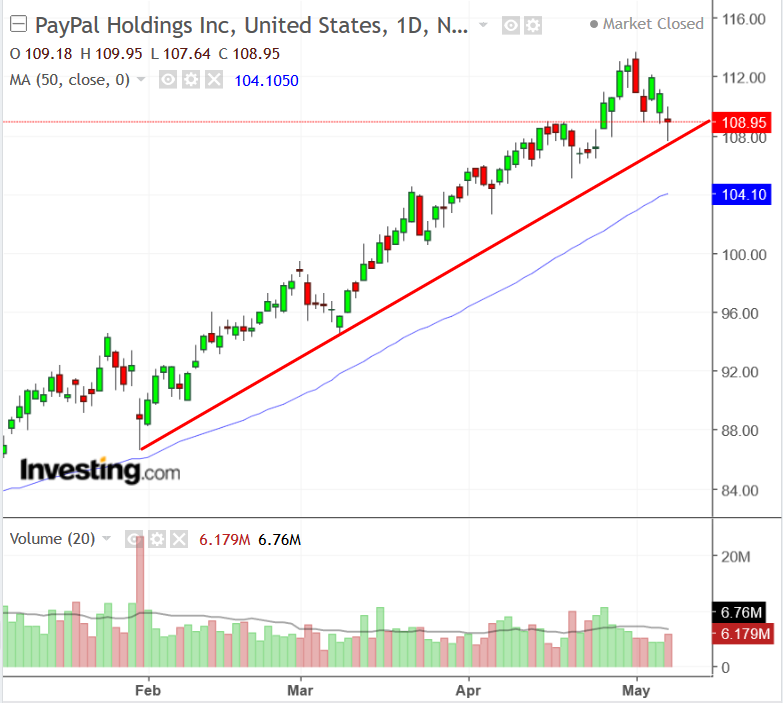 All charts powered by TradingView

More than 40 million people used Venmo for at least one transaction in the last 12 months, the company said in its earnings report released April 24. It was the first time PayPal has disclosed user numbers for the payment app.

Total payments volume (TPV) a closely watched metric for Venmo, grew 73% year-over-year to $21 billion in the first quarter. PayPal also said Venmo is on pace to do $100 billion in payment volume this year.

“Venmo continues its significant momentum,” PayPal CEO Dan Schulman said on the post-earnings call with analysts. “As user growth continues to accelerate, merchants are increasingly turning to Venmo as a way to attract a valuable and engaged consumer base.”

Venmo has announced partnerships with Uber (NYSE:UBER), Grubhub (NYSE:GRUB), and Chipotle (NYSE:CMG), among others. These partnerships are a main source of revenue for the app. Schulman said Venmo is on pace to do $300 million in revenue this year.

BTIG analyst Mark Palmer increased his price target on shares of PayPal to $130 from $114 in the wake of the Q1 report, citing opportunities related to the company’s continued monetization of Venmo and its ability to grow the PayPal user base at a fast clip.

Palmer is also upbeat about the company’s ability to keep driving user engagement higher, meaning the number of transactions users complete every year, while also attracting new users to the PayPal ecosystem. PayPal’s stock, which closed at $108.95 on Tuesday, has gained around 30% so far this year, giving the Palo Alto-based company a $128 billion market cap.

From a technical perspective, PYPL shares are trading well above their 50-day moving average (DMA), a promising signal that buyers are in control. At current levels, the stock is just 4% below its all-time high of $113.69 touched on May 1.

Square bulls took a hit when the mobile payment processor reported weaker-than-expected gross payment volume (GPV) and lower-than-expected guidance for the second quarter after markets closed on May 1. 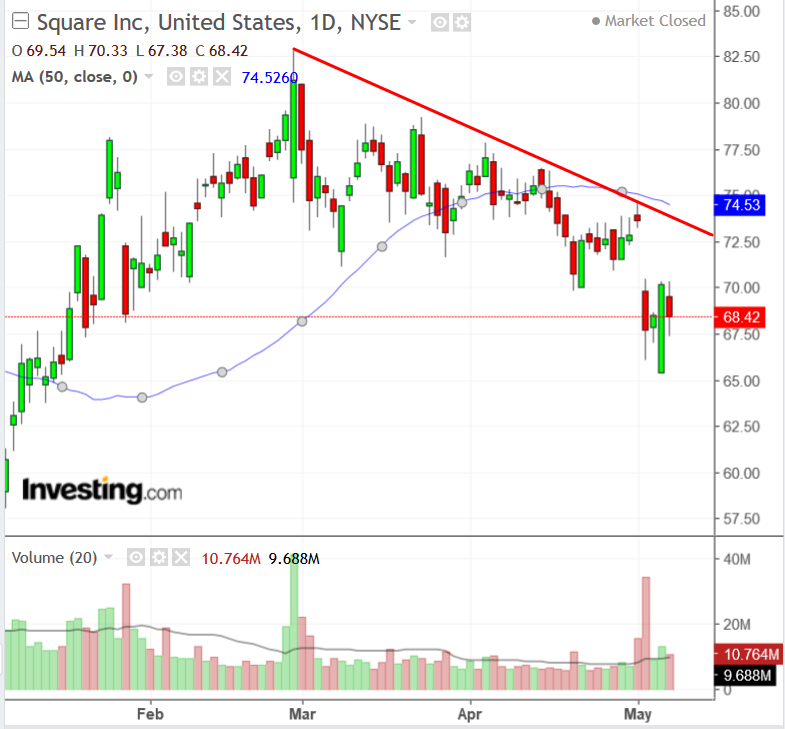 GPV, or the value of all transactions processed on its platform, came in at $22.6 billion, below the $22.8 billion analysts were expecting. Despite growing 26.7% from the same quarter a year earlier, GPV growth slowed from 28.3% in the preceding quarter and 29.6% for the full 2018.

Regarding the deceleration, Bernstein analyst Harshita Rawat wrote: “[It] raises questions about Square’s ability to continue to meaningfully outpace the market in a fiercely competitive merchant acquiring space.”

Signs of a continued slowdown in total revenue growth are another cause for concern. Square’s adjusted revenues were $489 million, up 59% year-on-year, slowing from revenue growth of 64% in the previous quarter.

And to add to the challenges, investors were also unimpressed with the company’s earnings guidance for the second quarter. Square is forecasting Q2 earnings per share in a range between 14 cents and 16 cents on revenue between $545 million and $555 million—both lower than anticipated.

BTIG’s Palmer reiterated his sell recommendation on Square following the company’s disappointing earnings and guidance update. He points to the payment processor’s challenges in growing its total addressable market.

“We believe SQ’s GPV deceleration and its unusual quarterly guidance miss may indicate that competition among larger merchants may be becoming more of a headwind for the company,” he wrote in a note on May 2.

In a bearish development that is likely to signal more losses to come in the weeks ahead, shares of San Francisco-based Square, which is run by Twitter CEO Jack Dorsey, are struggling below their 50-DMA. It closed at $68.42 yesterday, about 33% off its record peak of $101.15 hit on October 1.

What Is Service Delivery Orchestration and How Do Businesses Benefit from It?