Investing in equities, when done right, can provide unparalleled returns. But unless an investor has a specific stock they’re focused on, there’s another question that should be asked before any targeted choices are made. Is it better to invest in large- or small-cap shares?

Over the past decade, it has become conventional wisdom that small-caps usually outperform large-caps. But do they really? Here’s what we discovered from the data below, which lists the annual total returns (dividends included) of both the S&P 500 and Russell 2000. 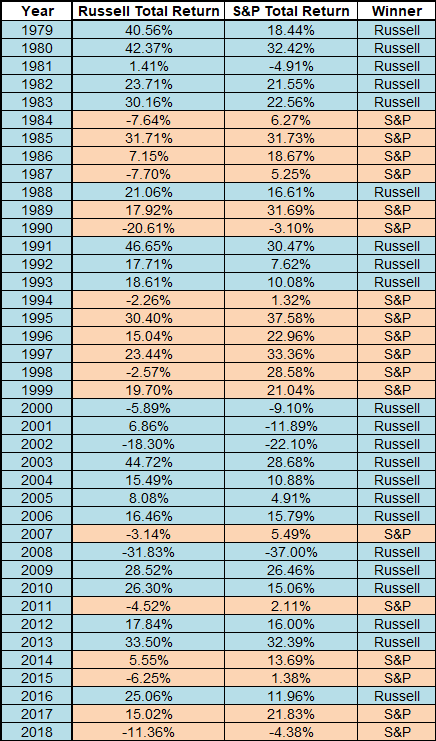 First, note that based on results over the past 40 years—the timeframe for which the Russell 2000 data was available—the small-cap index outperformed the S&P 500 22 times; the S&P bested the Russell 18 different times. Overall, then, it seems pretty balanced.

The Russell 2000 outperformance coincides with economically troubled times in the U.S.:

The S&P 500 outperformed when the U.S. economy was strong:

Of course, the correlation between the performance of the indices isn’t absolute. Some years the results are counterintuitive to this theory. Still, the correlation is strong enough to indicate that when the economy is expanding, go with large-caps. However, when economic conditions get tough, go with small-caps.

And since we’ve already crunched the numbers, here’s the answer to a likely secondary question: if you had invested $100 dollars in both the Russell and the S&P during January 1979, which investment would have made more money?

The strong recovery of the Russell 2000 after the tech bubble and subprime crisis allowed it to retake the overall lead in 2010, only for that to be squandered in 2014 when the S&P came roaring back to dominance, where it remains to this day.

What Is Service Delivery Orchestration and How Do Businesses Benefit from It?