Yesterday wasn’t a good day for Apple (NASDAQ:AAPL). Its shares plunged 5.8%, falling to $185.72 on their third straight day of losses, dragging down their performance over the past month by -6.6%.

The iPhone maker’s stock was attacked on two fronts: the U.S.-Sino trade fallout, which appears continue ratcheting higher as both countries up the ante. The U.S. is prepared to bludgeon all Chinese imports with tariffs, which could hit Apple’s China-manufactured products hard.

The second front was the U.S. Supreme Court ruling that app store customers, who claim the company inflates prices by imposing a 30% commission, can go ahead and sue the tech giant.

When a company faces not one but two headwinds, problems are doubled. Even if one of the headwinds dissipates, a further unrelated problem remains. This makes it hard to predict which way a stock will go, but investors can take a look at the chart below for a view of the trading alternatives they might consider. 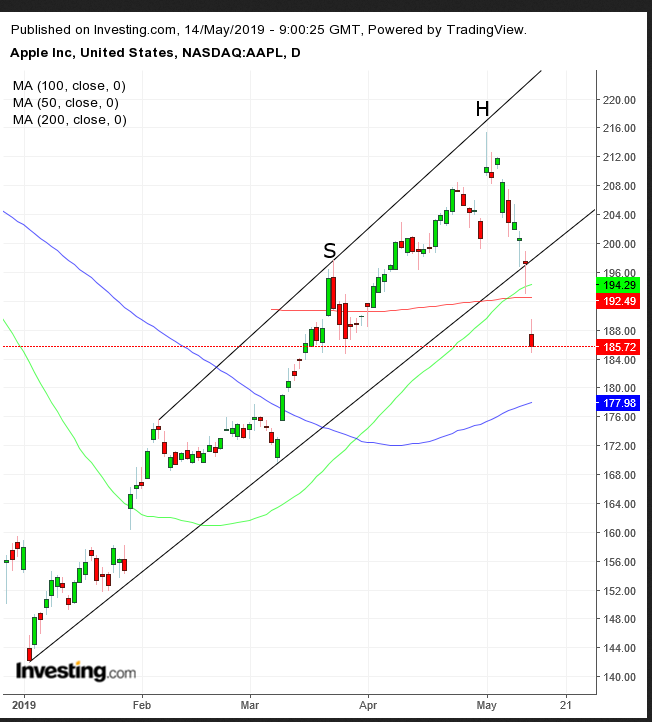 The stock opened yesterday 4.94% lower, creating a falling gap for the first time since Jan. 3. However, while January’s was a meaningless area gap, or common gap, yesterday’s was a breakaway gap — one which breaks out of a trading congestion, demonstrating that all the demand in the range was absorbed, and now sellers are lowering their offer prices to find new willing buyers.

When that happens, the depleted support of long positions moves the rug out from under the price’s feet, while triggered short orders push the price down hard.

This particular gap is powerful, as it included two other technical phenomena and possibly forming a third. The price fell through the 200 DMA as if it wasn’t even there, as well as the 50 DMA, which was tracing the channel bottom, a consistent support since the Jan. 3 bottom.

Finally, Apple’s contract is trading at $188.48, 0.41% higher. Even if prices rebound from here, unless they best the $215.31 May 1 high, potentially the head, they could be forming a H&S top, as yesterday’s price support suggests a connection to the March lows, potentially the left shoulder.

While only aggressive dip buyers would go long now, more moderate traders would wait for evidence of a failed rally to enter a short. Conservative investors would short after a bona fide reversal, such as with a H&S top.

Conservative traders would wait for an official reversal with a descending series of peaks and troughs, or at least for a complete H&S with a right shoulder, complete with a downside breakout of the neckline, where all the lows connect.

Moderate traders may be content with signs of resistance to a rally and short there.

Aggressive traders might risk a contrarian long position, providing they have a set plan that meets their account’s needs.

Bank of America says it’s safe to buy Bed Bath & Beyond again after...