The U.K.’s stock market has been a minefield, ever since the country voted to leave the European Union in June 2016. But the political momentum behind that Brexit vote has run aground: politicians have failed to find a way of leaving the world’s biggest single market without trashing the U.K. economy. As a result, some British bookmakers now see at least a 30% chance of Brexit being cancelled altogether.

That would lift a cloud of uncertainty over the market in general and trigger at least a partial re-rating of the U.K. relative to other equity markets. According to Bank of America Merrill Lynch, a net balance of 28% of fund managers were underweight U.K. stocks in April, making them one of the most ‘under-owned’ asset classes in the world.

But not all stocks would benefit equally. Partly, that’s down to exchange rate effects: many of the blue-chips, such as BP (NYSE:BP), (LON:BP) or British American Tobacco (NYSE:BTI), (LON:BATS) are globally oriented, with most of their revenue booked in dollars. The impact on them of cancelling Brexit would be modest.

But for smaller companies more geared to the domestic economy, it could be a watershed moment. Here are four that could be worth paying attention to if the Brits finally decide to Bremain.

The last three years have been hard on London-focused realtors like Foxtons Group (OTC:FXTGY), (LON:FOXT). Until Brexit, it seemed like nothing could possibly derail the London housing market. 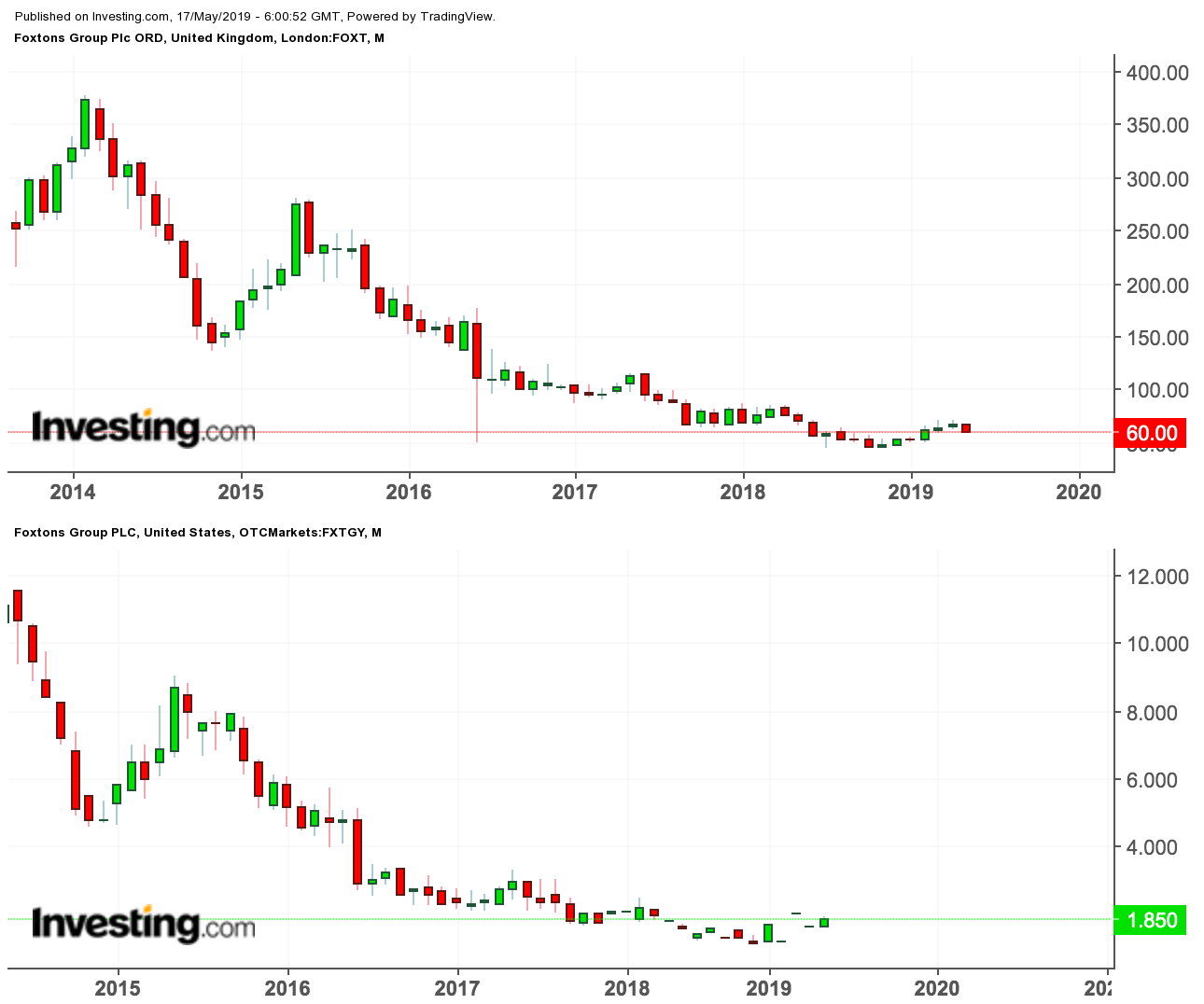 Prices roared back after the Great Recession in response to a powerful cocktail of zero interest rates, government subsidies, supply shortages and insatiable investment demand both from locals and foreign investors. London’s status as the financial services capital of Europe provided a solid bedrock of demand.

But Brexit threatened to shift tens of thousands of bankers’ jobs to cities such as Paris, Dublin and Frankfurt, while a backlash against globalization—including moves to squeeze more tax out of offshore buyers—has also deterred buyers. Foxtons’ revenue last year was down 30% from 2015, the last full year before Brexit. Overall London sales volumes are down over 20% since then and prices are also falling. 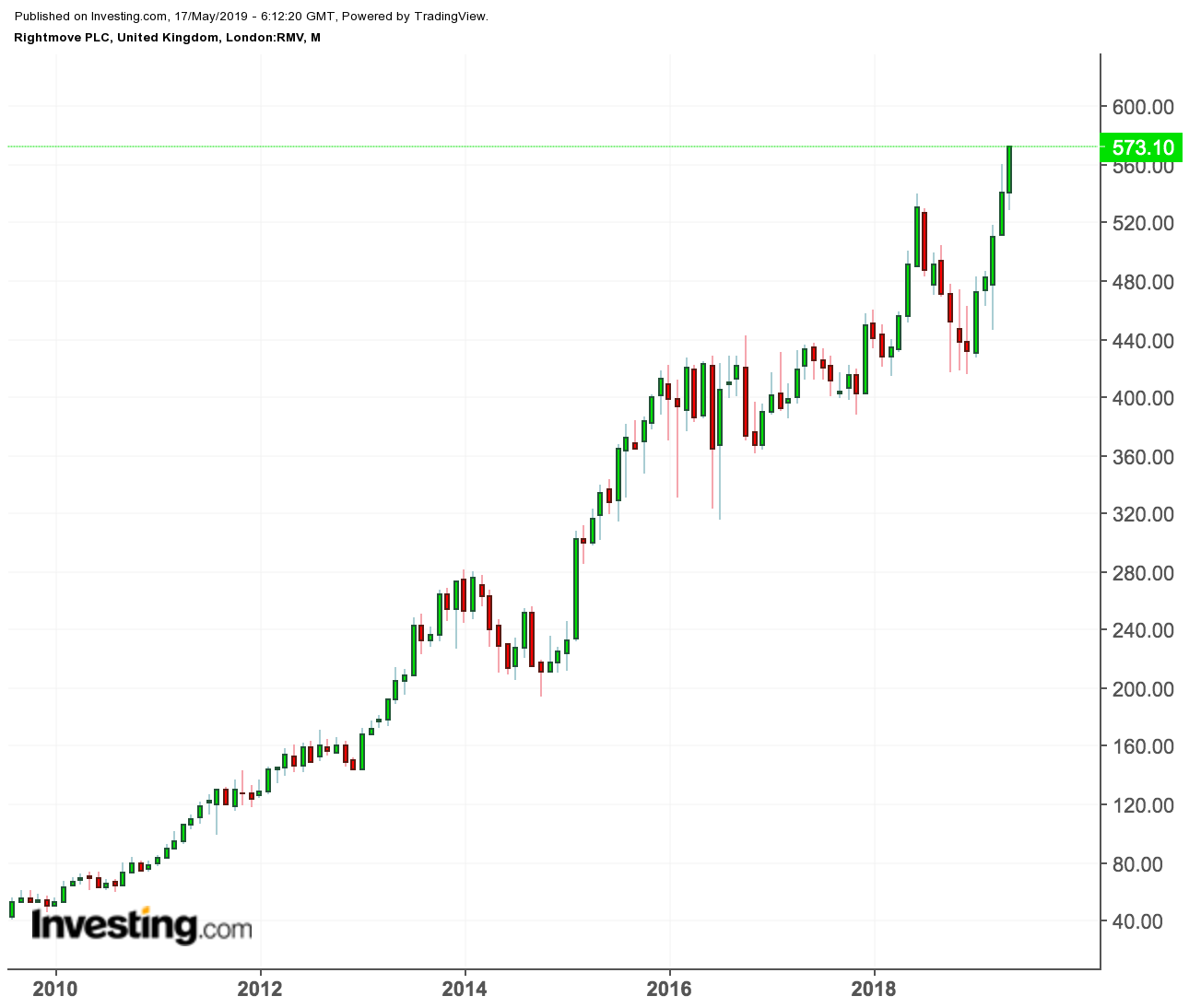 Disruption from online rival Rightmove (OTC:RTMVY), (LON:RMV), which hit a new all-time high last week, means Foxtons’ glory days may never return, but with the shares down 78% since 2015 and three years worth of of pent-up demand in London waiting to be satisfied, there’s considerable room for a bounce.

Europe’s second-largest discount airline, EasyJet (OTC:ESYJY), (LON:EZJ), which bases half of its 300-strong fleet of planes in the U.K., has seen its shares plunge more than 30% since the vote to leave the European Union three years ago. Brexit wiped 12% off their purchasing power through the exchange rate in 2016; since then the foreign exchange market has consistently signaled that cancelling Brexit would be the optimal outcome for sterling. No Brexit would mean a higher pound, lower fuel costs and thus more U.K. demand. 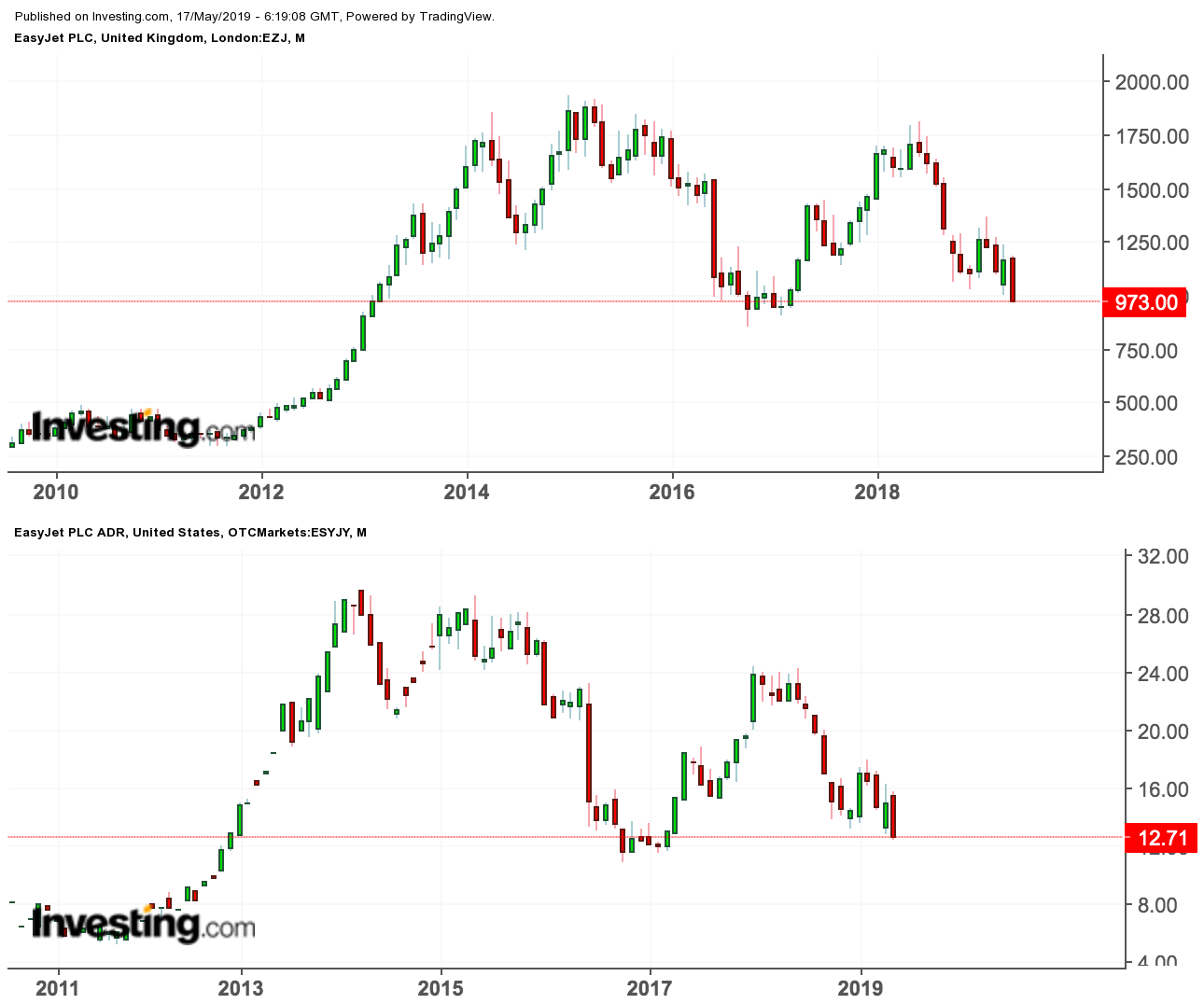 It also removes the massive distraction of having to tinker with the group’s ownership structure to ensure that the airline can keep serving EU markets. International Airlines Group (LON:ICAG), the parent of British Airways, has of course wrestled with the same ownership issues, but the Brexit factor is more concentrated at EasyJet because it relies exclusively on short-haul flights, overwhelmingly to EU destinations.

The owner of two of the U.K.’s big bank names—Lloyds and Halifax—and one of its biggest asset managers, Scottish Widows, Lloyds (NYSE:LYG), (LON:LLOY) is well placed to profit from any bump to confidence as consumers return to the housing market and businesses unfreeze their capital spending plans. The mammoth lender’s shares have sunk around 10% since the Brexit vote three years ago. 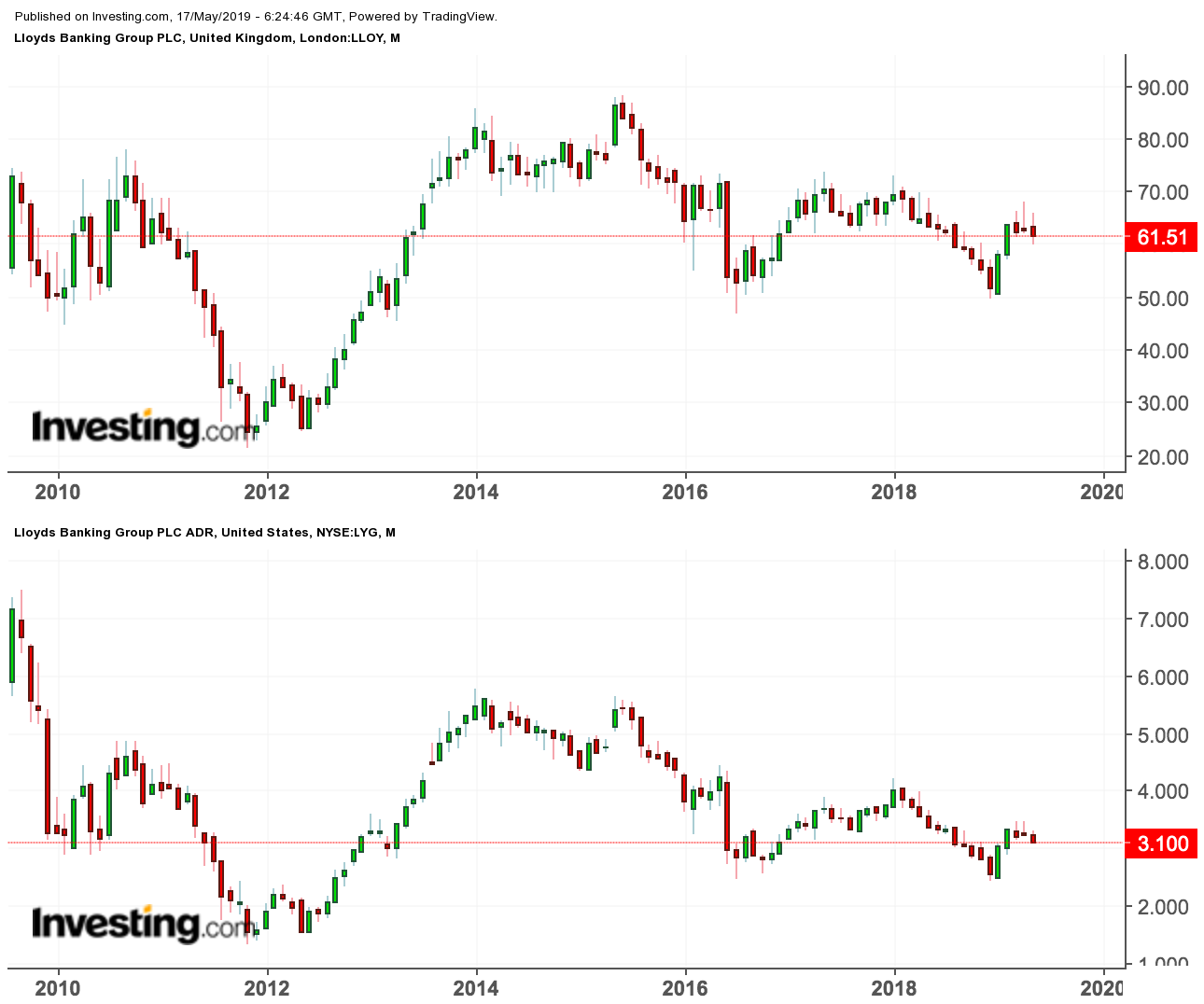 The Bank of England’s guidance suggests that it would soon raise interest rates if the uncertainty of Brexit was removed, something that would give Lloyds and the U.K. banking sector in general some welcome room for margin expansion after a decade of rates close to zero. Royal Bank of Scotland (OTC:RBSPF), (LON:RBS) stands to gain from similar factors, but already trades at a higher earnings multiple, and while its dividend yield of 2.37% is less than half of Lloyds’s which is currently at 5.26%, RBS will also have to navigate a stock overhang as the U.K. government continues to reduce the stake that it acquired during the great bailouts of 2008 and 2009.

Operating casual dining chains in a sector increasingly challenged by online delivery services, Restaurant Group (LON:RTN) has perhaps more secular challenges than the other stocks on this list. Comparable sales have fallen for two years running and the shares have plummeted more than 50% since the Brexit vote in 2016.

The company is hoping that its expensive acquisition of Asian-themed Wagamama last year can turn that around. It faces an intriguing handover at the top, with the well-regarded Andy McCue leaving the CEO seat to Andy Hornby, who gained notoriety for driving Lloyds (see above) into the arms of a government bailout in 2008, before restoring his reputation at gambling group GVC. 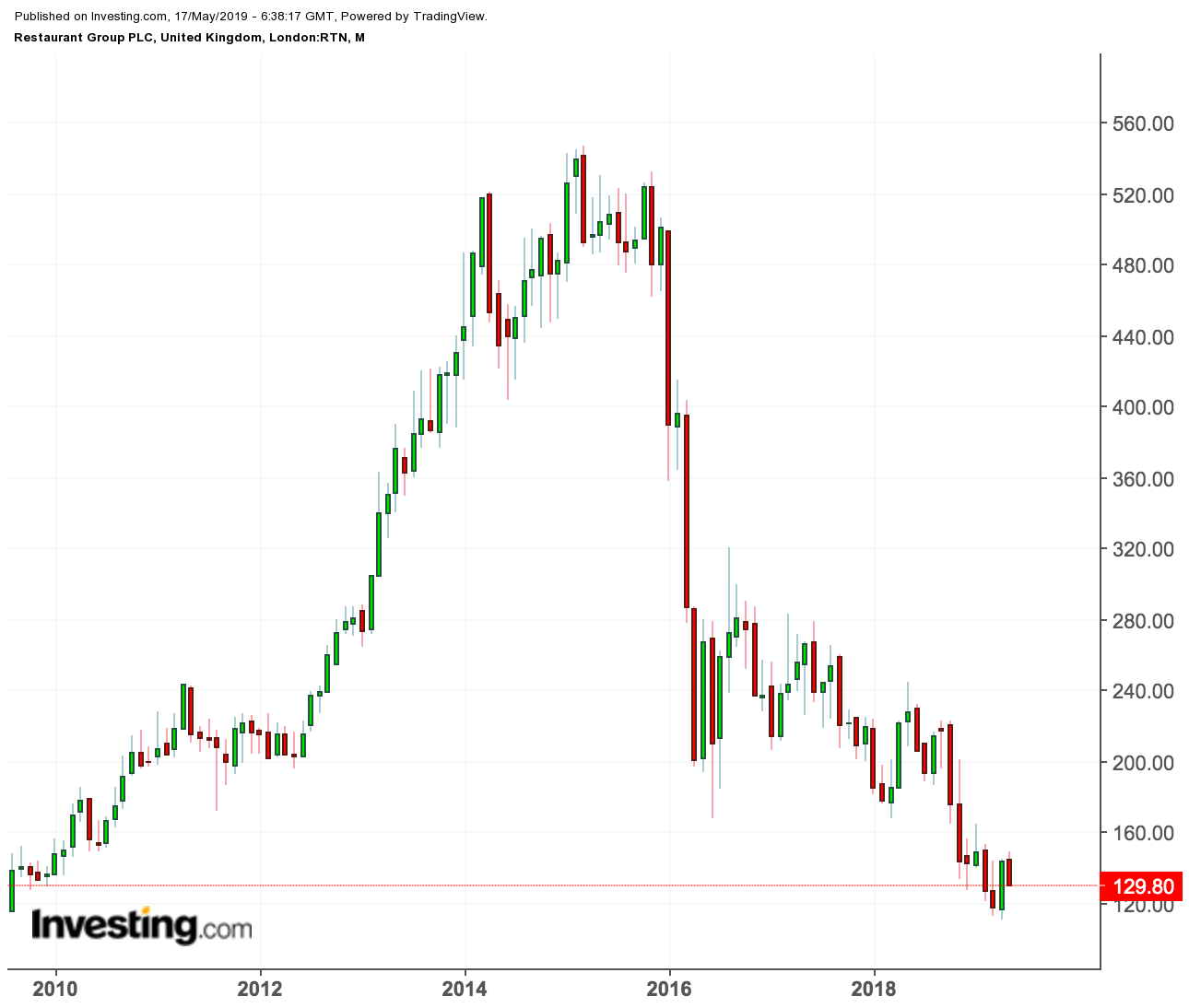 *In contrast to the other stocks mentioned here, Restaurant Group does not have U.S.-listed depositary receipts. That means that U.S.-based investors would need to ensure they can hold the U.K.-listed stock directly. 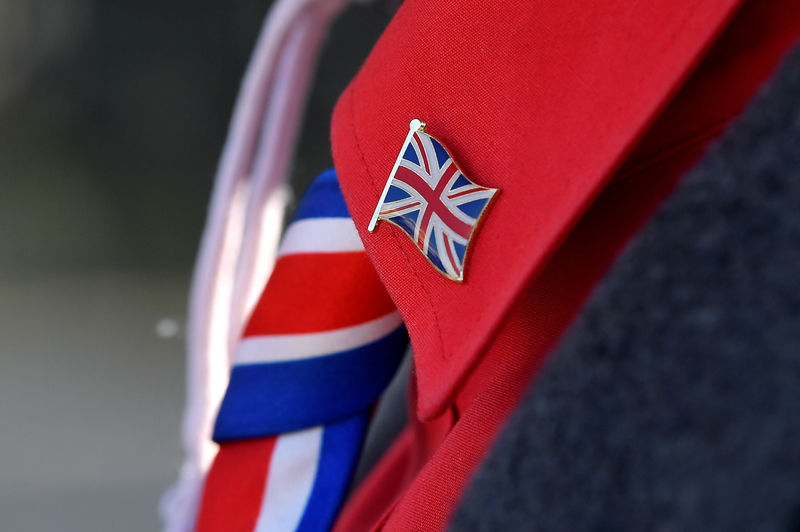 Pro-Brexit protesters demonstrate outside the Houses of Parliament